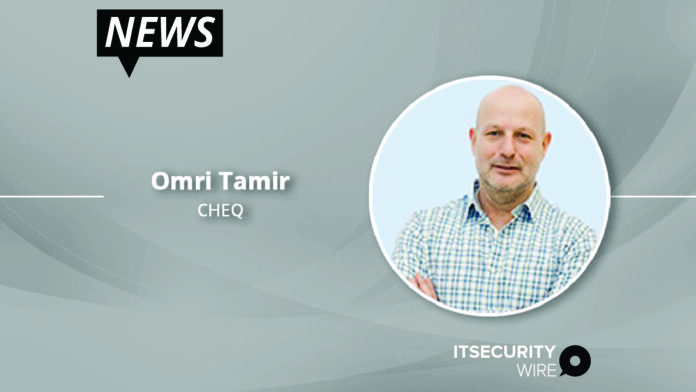 As COO & President, Omri will continue working hand in hand with CEO Guy Tytunovich and the board to push for further global growth, focusing on execution and significant scale. Guy Tytunovich, Founder and CEO of CHEQ said: “Since joining us from Salesforce Datorama 3 years ago, Omri has been instrumental to our massive growth. I’m honored to have Omri as my partner and I look forward to see CHEQ’s success in the next couple of years, executed by the outstanding CHEQ team and leadership.”

“At CHEQ, I have found a remarkable group of passionate founders and leaders, driving the company to fulfill a very ambitious vision,” said Omri Tamir. “As CHEQers we’re all aligned behind our mission of building a strategic category and fighting the ‘Fake Web’. This vision, together with the company’s values – is what brings the best talent to CHEQ and I’m honored to further partner with Guy and the rest of the team”.

CHEQ, which protects Go-to-Market teams from bots, fake users, and malicious visitors, also announced a string of recent executive hires. Seffy Kotz was named Chief Growth Officer, joining from Monday.com where he led the User Acquisition Practice. In addition, Kazuki Fuse was named Head of APAC, also joining from Salesforce Datorama where he served as Managing Director of Japan. Guy Tytunovich, on the new appointments: “We’re always fortunate to be able to bring in word-class executives from great fellow SaaS companies. Seffy and Kazuki are an incredible addition to an already stellar leadership, and I have no doubt that their experience, knowledge, and attitudes will play a major part in CHEQ’s continued success.”

Google Android Updates For May Patch For Several Vulnerabilities