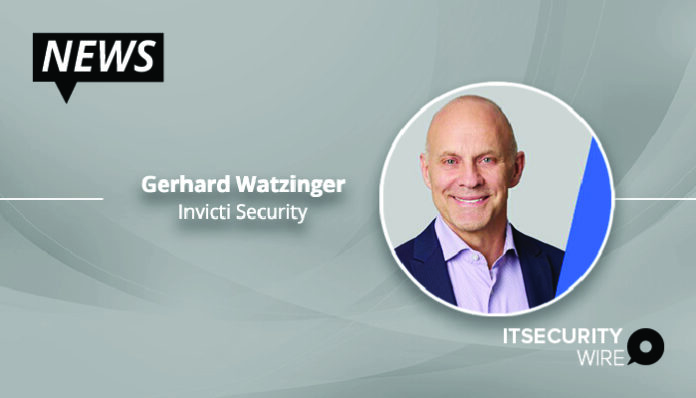 Along with his integral role in Crowdstrike’s creation and serving as chairman of the board since 2012, Watzinger also currently is a member of the board at Mastech Digital, Absolute Software, and KnowBe4. He brings a deep focus and storied career within cybersecurity and was a key driver behind McAfee’s 2010 acquisition by Intel, which resulted in a record-making $7.7B transaction. In his personal time, Watzinger is an internationally accomplished race car driver, competing in over 11 countries, earning 73 podium medals, and winning the coveted 24-hour endurance Sebring and Dubai races.

“The cybersecurity landscape is not unlike the race track. Navigating it requires both a proactive and a defensive approach and a constant pulse for what lies ahead,” said Watzinger. “I’ve had the privilege to be at the forefront of some of cybersecurity’s biggest waves. Application security is the wave of our time, and Invicti is the clear leader, with a modern approach and the technical horsepower to make and keep customers secure.”

“On the track and in the Boardroom, Gerhard has earned a reputation for speed, innovation, and fearless leadership,” said Michael George, Invicti CEO. “It’s an honor to welcome Gerhard to Invicti as Chairman of the Board as we continue to deliver on our promise to dynamically test applications at scale, with a high degree of accuracy without the false positives. His commitment here is a resounding endorsement of the leadership position we hold in securing applications efficiently and effectively.”

Watzinger’s appointment comes on the heels of more record growth for Invicti. Last month, the company was named a Challenger in the Gartner Magic Quadrant for Application Security Testing and welcomed new CMO Alex Bender and SVP Engineering John Mandel. In 2021, Invicti grew annual recurring revenue (ARR) by 50% and added nearly 750 new customers. The company expects to expand its employee base by as much as 40% this year.

Cyber attacks are now the #1 cause of data loss, Databarracks research reveals