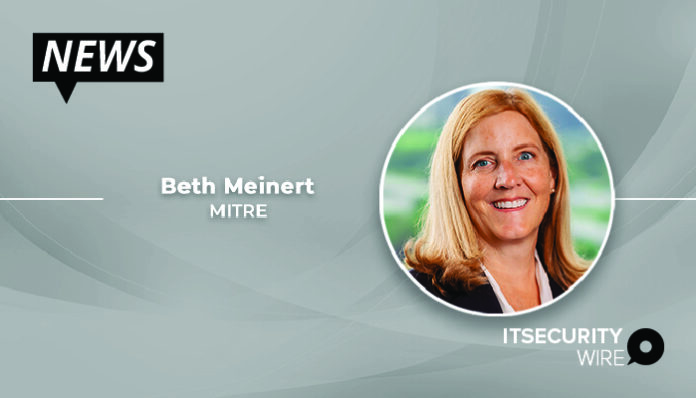 MITRE has promoted Beth Meinert from vice president to Senior Vice President and General Manager, MITRE Public Sector (MPS) after a competitive search for the role. In this position, she will set the strategy and growth priorities of MPS, engage key senior sponsors, and oversee the work of the federally funded research and development centers (FFRDCs) that MITRE operates for civilian government agencies, including the Center for Government Effectiveness and Modernization (CGEM), Center for Securing the Homeland (CSH), CMS Alliance to Modernize Healthcare (Health), and Center for Advanced Aviation System Development (CAASD).

“Given her impactful career at MITRE, I’m proud to commend Beth on this executive leadership role. She has been both a pioneer and leader throughout MITRE’s continued transformation, leaning forward in developing whole-of-nation solutions beyond our traditional national security focus,” said Jason Providakes, MITRE president and CEO. “Beth is committed to the public interest, and because of that, has a proven record of delivering mission impact for our government sponsors, as well as engaging public and private entities to address the core needs of the nation.”

Meinert is an Army veteran and joined MITRE in 1988. She most recently served as vice president and director of the Center for Government Effectiveness and Modernization where she managed the work of government sponsors and partners, including the U.S. Treasury Department, Internal Revenue Service, Social Security Administration, the Department of Veterans Affairs, and the U.S. Courts and Judiciary. Meinert brings diverse experience in business, technology, finance, economics, and public service, and continues to serve as the officer champion for all MITRE veterans through her work with the Veterans Council.

Meinert holds a bachelor’s degree in electrical engineering from Gannon University and is a graduate of the Harvard Kennedy School Senior Executives in National and International Security program.

CronRAT Abuses Linux Task Scheduler to Stay Under the Radar