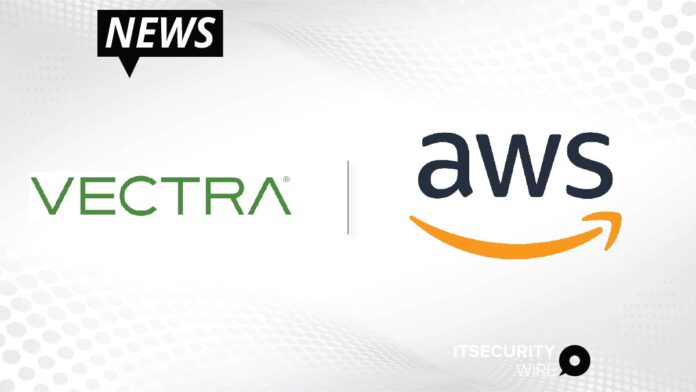 Vectra AI, a leader in threat detection and response, today announced the introduction of Vectra Detect for Amazon Web Services, Inc. (AWS). Detect for AWS is a cloud-native SaaS solution that provides continuous, scalable agentless threat detection, prioritization, investigation, and response to attacks targeting applications running on AWS, as well as users, compute, and storage instances, including the use on AWS of the control plane itself. Detect for AWS works both at runtime and holistically across all AWS regions and does not require packet mirroring.

The speed and agility at which today’s digital environment changes has led many IT teams to convert their traditional on-premises infrastructure to cloud-native architectures, resulting in a rise in the use of Platform as a Service (PaaS) and Infrastructure as a Service (IaaS) applications. As the speed of cloud adoption increases, so does the risk of introducing security issues within cloud environments.

“Security is job one at Sephora and that requires having security tools that can help my IT teams gain deep visibility that goes beyond initial compromise and exfiltration detection,” said John Byun, Senior Architect of Information Security at Sephora.

“To scale our cloud operations even more securely, there needs to be deep visibility, with details, and context for compromised identities, privileged escalations, and the lateral movement of threats between resources without managing additional agents.”

As a part of the Vectra Cognito platform, it is the first and only solution that can track attacks and compromised users and roles across every region in a single, holistic view. This allows organizations to confidently migrate, develop, and deploy more AWS applications at scale, while reducing the risk of introducing security issues.

“We are pleased that Vectra AI continues to collaborate with AWS and integrate their solutions to work with AWS security services and AWS Marketplace,” said Dan Plastina, Vice President, External Security Services, AWS. “Our customers want solutions that work together to deliver increased visibility and improved security without significant increase to operations complexity.”

“Over 70% of our customers who leverage AWS say they are using at least four AWS services and many, more than twenty-one different services,” said Randy Schirman, Vectra VP, Partnerships. “With AWS being such a critical component to every-day operations, it is essential that their applications are being protected from lateral movements in the cloud and we believe there is no better solution to achieve this than Detect for AWS.”