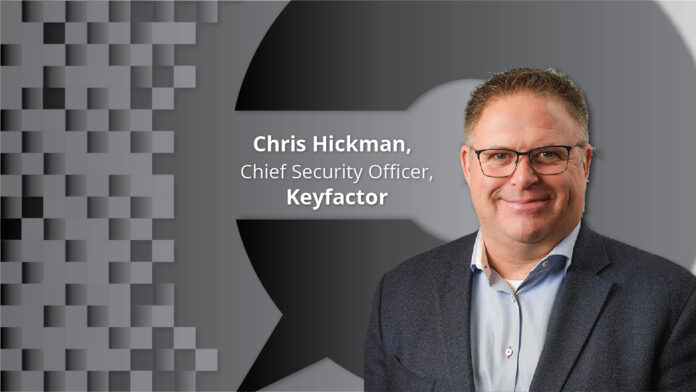 “As organizations race to achieve a zero-trust security model, the uncontrolled sprawl of SSH keys and the access they grant creates a serious problem. Getting visibility to SSH keys is the first step to preventing exploits,” says Chris Hickman, Chief Security Officer, Keyfactor, in an exclusive interview with ITSecurityWire.

ITSW Bureau: Why are SSH keys considered to be ideal for automated processes?

Chris Hickman: The shift to cloud and infrastructure automation means that the number of privileged SSH connections has increased drastically. On average, a large enterprise has between 50-200 keys per server, with over a million keys across their environment. Key sprawl is a growing problem for businesses, especially as SSH keys lack governance and oversight of traditional privileged access tools like passwords.

Public key infrastructure (PKI) is more secure than password logins. It does not require user interaction to grant access, allowing users to access a remote server multiple times without manually log in. This makes SSH keys ideal for IT process automation, where machines need to connect to one another without user interaction securely.

ITSW Bureau: How has the adoption of cloud, DevOps, and remote working changed the way enterprises view SSH key management?

Chris Hickman: SSH provides remote access for the administration of devices and servers. With the increase of work from home model, SSH keys have multiplied as remote server administration and configuration have become the norm during the Covid 19 epidemic. Simply put, there are more keys in use today than ever. However, management practices that are typically lacking to begin with, continue to be lacking, compounding the management issues associated with SSH keys.

ITSW Bureau: What, according to you, are the significant differences between X.509 certificates and SSH keys?

Chris Hickman: While they share many similarities, one of the most notable differences is that SSH keys do not expire. This means that once a key is generated, it remains valid and active in perpetuity. As these keys are not tied to a central identity store, disabling login does not necessarily remove access based on the SSH key. The two identities are not connected.

ITSW Bureau: What are the potential risks and their causes when enterprises implement SSH keys?

Chris Hickman: In DevOps, SSH is a fundamental tool for IT operations, developer build, and release processes. Giving developers unlimited and uncontrolled opportunities to create and copy SSH keys presents a security challenge. As organizations race to achieve a zero-trust security model, the uncontrolled sprawl of SSH keys and the access they grant creates a serious problem. Most public cloud workloads run on Linux; SSH is inherently secure, but the risk of exposing access or credentials is serious.

Read More Interviews: The Need for Safeguarding IT Infrastructure in the New Normal

Remote work leverages SSH to allow users to configure and manage systems from anywhere. Without regular visibility into who owns SSH keys, how they are being used, and what access they grant, they can become risk liability. Attacks leveraging SSH keys are growing in frequency and sophistication, using several vectors to access and exploit keys including brute force attacks, advanced malware, network backdoors and lateral movement within the network.

Chris Hickman: Traditional approaches to SSH key management are typically manual, labor-intensive, and prone to error. Manual logins and scans are not practical. Workloads get spun up and torn down and employees come and go, making it impossible to have an inventory that is accurate and up-to-date of all SSH keys in the environment.

Getting visibility to SSH keys is the first step to preventing exploits. In order to manage keys effectively, teams need discovery tools to find keys and map trust relationships, monitoring and reporting capabilities to identify risks, centralized governance over key rotation and usage and automation, and self-service to provision and update keys.

These are six steps that teams can consider to get ahead of key sprawl and mitigate future risk:

Chris Hickman is the chief security officer at Keyfactor, the leader in cloud-first PKI as-a-Service and crypto-agility solutions.Follow Chris on LinkedIn.