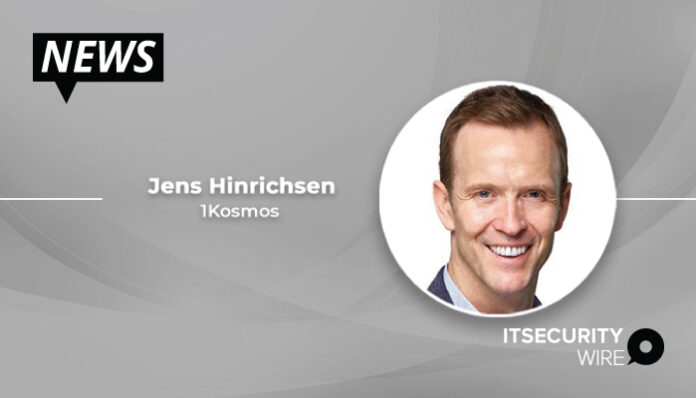 1Kosmos, the only company that unifies identity proofing and passwordless authentication, today announced it has appointed Jens Hinrichsen, Senior Vice President of Sales for North America. He Joins 1Kosmos from NuData Security, a Mastercard company.

“Jens is a proven technology sales leader and company builder who helped scale NuData Security from its early days on through its acquisition by Mastercard,” said Hemen Vimadalal, CEO of 1Kosmos. “His in-depth knowledge of the digital identity and fraud space will help us extend our leadership position in North America for passwordless and identity-based authentication.”

Jens joins 1Kosmos from behavioral biometrics pioneer NuData Security, a Mastercard Company, where he served as Senior Vice President, Sales and Business Development. He helped grow NuData from 2013 until its acquisition by Mastercard in 2017. He previously was Vice President, Marketing and Business Development for Versafe (acquired by F5), and held senior sales and marketing positions with eBay and RSA.

“The ubiquitous adoption of cloud computing and remote work has made identity, now more than ever, the new security perimeter, and upped the ante for implementing identity-based authentication that cannot be spoofed by attackers,” said Jens Hinrichsen. “1Kosmos has created a powerful and easy-to-use platform that establishes irrefutable digital identities for implementing bulletproof passwordless and multi-factor authentication. I look forward to helping the company capitalize on the big market opportunity in front of us.”