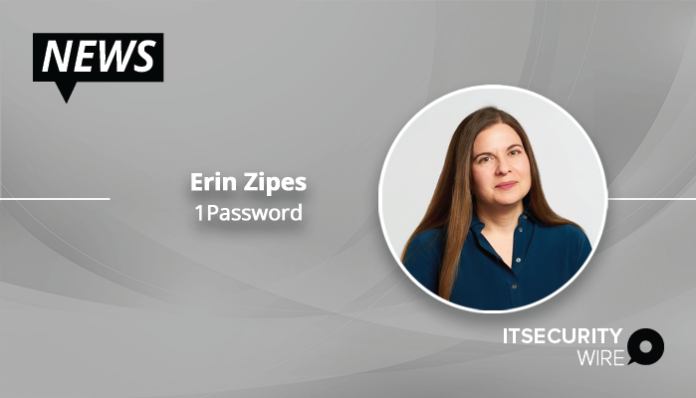 1Password, the leader in human-centric security and privacy, has appointed Erin Zipes as its first Chief Legal Officer to help the company scale to meet demand for its security solutions. With nearly two decades of legal experience at law firms and in-house, including more than seven years of legal leadership at Shopify, Erin has built and scaled legal teams to support rapidly growing operations, as well as major transactions. She has also invested in and advised female-founded startups as one of the founding partners of the angel investing collective, Backbone Angels.

“I’m a longtime 1Password user and have experienced firsthand the important role it plays in securing businesses and families by making security easier for anyone,” said Zipes. “The company’s vision of bringing human-centric security to everyone is fueling strong growth, which is exactly what I was looking for. Joining an amazing team at an innovative Canadian-based company to lead and build out legal, work with an exceptional executive team, and help scale and achieve our mission of protecting many more online is an opportunity of a lifetime.”

Also Read: Is SaaS a Cybersecurity Risk or a Benison?

Zipes was previously the Vice President, Assistant General Counsel at Shopify, where she helped to take the company public, and built and scaled the company’s corporate legal team to support tremendous growth. During her time at Shopify, Zipes joined nine other women to found the angel investing collective, Backbone Angels, dedicated to funding and empowering women and non-binary founders, including 1Password, Haloo, Neurovine and more. Zipes began her legal career as a lawyer at Stikeman Elliott in Toronto, and began her in-house experience at Nordion (formerly NYSE/TSX).

“I had the pleasure of getting to know Erin in her role as a founding member of Backbone Angels, who invested in our Series C round. Her enthusiasm for 1Password and impressive experience makes her a natural fit for 1Password,” said Jeff Shiner, CEO of 1Password. “Erin’s commitment to building a diverse, inclusive and business-focused legal function, as well as experience leading Shopify through their IPO, will be essential to fuel our trajectory.”

Erin joins a world-class executive team, bolstered over the past year with key hires to support the company’s rapid growth, including its first Chief Marketing Officer, Chief Technology Officer and Chief People Officer.

CoSoSys Launches Advanced Content Detection and Integrations With the Release of Endpoint Protector 5.5.0.0