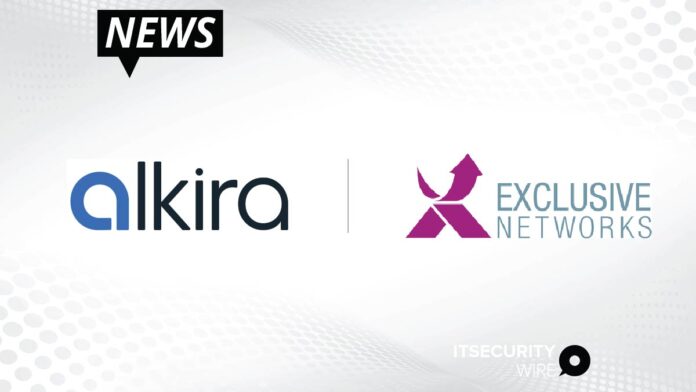 The deal makes Alkira’s CNaaS platform Cloud Services Exchange (CSX) available through Exclusive’s global partner ecosystem spanning 40 countries across five continents. It also underlines Exclusive’s commitment to growing its cloud portfolio in a market estimated by IDC to be on track for $1.3 trillion by 20251.

Exclusive Networks (EXN), which posted gross sales of €2.9 billion in 2020, completed a successful Initial Public Offering and listing on Euronext Paris in September this year. The company has partnerships with some of the world’s largest and most successful cybersecurity, networking and cloud infrastructure vendors, including Fortinet, Nutanix, Palo Alto Networks, Rubrik and Sentinel One. It provides cybersecurity platforms, cloud solutions and associated value-add professional services through an extensive global partner network of specialist resellers, MSPs, CSPs, telcos and systems integrators.

Alkira has appointed Paul Couturier as Senior VP International to spearhead its expansion in the EMEA and APAC regions. Couturier is an IT industry veteran who has previously held senior management roles growing international markets for Efficient Networks, TippingPoint, Cyan, LightCyber and Palo Alto Networks. In his latest role, he managed IntSights from its European debut to its acquisition by Rapid 7.

Amir Khan, Co-Founder and Chief Executive Officer of Alkira, said: “Our vision is to simplify networking in the cloud era. As the CNaaS pioneer, Alkira has eliminated the complexities and costs of building and operating networks and seamlessly integrated cloud, multi-cloud and legacy systems – no hardware, no data center, no need to ship anything. Exclusive Networks is an ideal partner for Alkira, not only because it provides us with access to their first-class global network, but because we have a shared vision of an as-a-service future.”

Andy Travers, Executive Vice President, Worldwide Sales and Marketing for Exclusive Networks, said: “Our success has been built on bringing together best in class cybersecurity, networking and automation solutions. In the cloud era, the challenge for customers is how to integrate and manage these resources in an increasingly complex environment, while controlling costs and moving the business forward. With nothing more than a few mouse clicks, Alkira’s CNaaS enables secure hybrid cloud and multi-cloud networks to be set up in hours rather than months, and puts customers, not the big cloud providers, in the driver’s seat.

“Migration of enterprise applications to the cloud is set to double in the next two years, according to Gartner2, so it seems inevitable that networking infrastructure will follow the same trend. Just as Alkira’s founders pioneered the SD-WAN market, we now believe they are showing the way in cloud networking.”

Alkira’s CNaaS platform simplifies provisioning, connectivity and end-to-end management of networks across cloud environments, including the integration of firewalls, IPS/IDS, and load balancers, as well as enhancing the capabilities of legacy SD-WAN solutions. It enables a flexible, unified approach to secure, high-performance networking in which customers only pay for the capacity they use, and the network automatically scales to meet changing patterns of usage and demand.

How Artificial Intelligence can be deployed to enhance cybersecurity