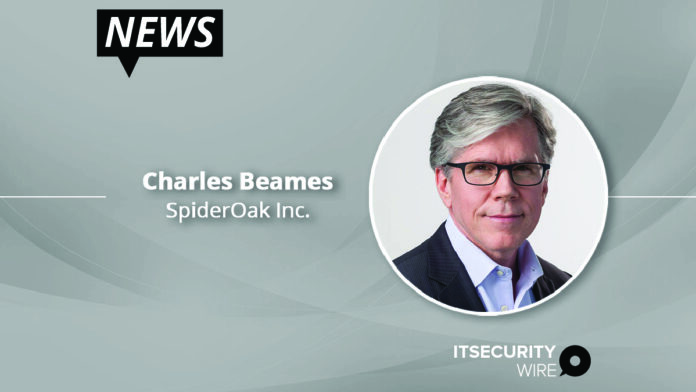 SpiderOak, a company specializing in Zero-Trust cybersecurity software for commercial and military operations, is pleased to announce that Charles Beames has been elected Chairman of the company’s Board of Directors.

Beames is an accomplished executive and thought leader with over three decades of success in the aerospace industry. This role will lend his expertise to addressing cyber threats to the new space economy with novel and innovative products and services.

Before joining SpiderOak, Beames held several corporate leadership positions including President of Microsoft co-founder Paul Allen’s Vulcan Aerospace. At Vulcan Aerospace, Charles managed asset allocation of a $1+ billion aerospace and technology investment portfolio, including Stratolaunch, the world’s largest airplane. Prior to leading Vulcan and its portfolio of companies, Charles was a member of the Senior Executive Service, holding several executive positions within the Department of Defense. His last position held at DoD was as the Principal Director, Space, and Intelligence Systems, overseeing the execution of a $90 billion annual acquisition budget. Before that and after serving 23 years in space and intelligence leadership positions around the world, Beames retired from the U.S. Air Force as a Colonel.

Charles joins SpiderOak at a critical juncture in the company’s history as we move to introduce our recently completed OrbitSecure software to orbital operations. The space business continues to see unprecedented growth in both the commercial and military sectors, and SpiderOak intends to lead in securing these networks with its proprietary Zero Trust platform built on blockchain technology.

Until very recently, the space cybersecurity market had yet to garner the interest and capital this market opportunity warrants. This is changing quickly as investors are seeking new opportunities in the coming multi-trillion-dollar marketplace. Beames’ aerospace and business expertise will be essential in developing SpiderOak’s strategy as we capitalize on our unique market position as the only supplier of commercial off-the-shelf (COTS) Zero-Trust space cyber products.

Recently nominated for the 2021 Satellite Technology of the Year award, SpiderOak is an original in the COTS space cyber market, but the company expects new competition to emerge as it becomes apparent that the COTS model is ideally suited to the security requirements of hybrid space architectures. While traditional space architectures depended on small numbers of large, expensive, and complex satellites, today’s hybrid systems take advantage of low-cost commercial and government small satellites and will benefit from the economies of scale, speed, and ease of deployment offered by the COTS model.

“The gravest threat to commercial and national security space success continues to be a cyber-attack from our adversaries. Today, it even surpasses hardware, launch, and all other ground operations challenges. None of us were surprised, for example, when the Director of the National Reconnaissance Office just warned that Russia’s military could target satellites to disrupt communications,” remarked Beames. He continued, “I am excited to be leading the board of the company that pioneered No-Knowledge encryption systems and will ensure a more secure end-to-end space infrastructure for our country and the private sector.”

“We are very fortunate to have an experienced board chairman from the space industry, both military and commercial, with a renowned record of leading companies to great commercial success,” said Dave Pearah, CEO of SpiderOak. He added: “His role will be to guide the vision and strategy of the company in this fast-growing industry that he knows so well.”

In addition to his new role at SpiderOak, Beames will continue to serve as the Executive Chairman of York Space Systems, Chairman of the SmallSat Alliance, and remain on the boards of other aerospace companies. He continues to be a regular contributor to Forbes magazine, as well as Politico, C4ISRNET, and SpaceNews on all things space.

How CIOs can help protect remote employees and halt cybercriminals