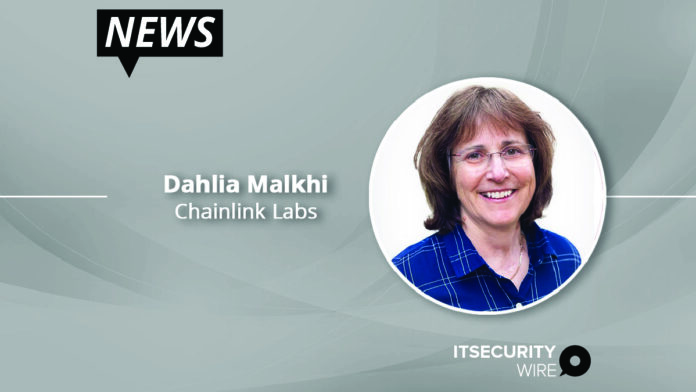 “As Chainlink Labs continues to build the secure infrastructure necessary to increase Web3 adoption and create a world powered by cryptographic truth, we are breaking new ground in the areas of cryptography and mathematics and need the best and brightest minds to join us in solving some of the world’s hardest problems,” said Sergey Nazarov, CEO of Chainlink Labs. “Dahlia is one of the foremost experts on decentralized systems consensus, a critical factor in ensuring security, scalability, and performance across the blockchain ecosystem, making her an ideal addition to the Chainlink Labs research team.”

Dr. Malkhi joins Chainlink Labs from the Diem Association, where she was CTO and lead maintainer, as well as lead researcher at Novi. Prior to that, she co-founded VMware Research, serving as a principal researcher, and spent more than a decade at Microsoft Research. In addition to her work within the technology industry, Dr. Malkhi served as a tenured associate professor of computer science at the Hebrew University of Jerusalem, and has authored more than 100 publications with contributions to broad aspects of the reliability and security of distributed systems.

“Decentralized oracle networks are absolutely essential to the progression of Web3, and Chainlink is the undisputed leader in this space,” said Dr. Malkhi. “I was drawn in by the existing team of experienced researchers at Chainlink Labs and the team’s laser focus on the critical technologies needed to advance Web3 and create more secure, transparent, and truth-based infrastructure for all. I’m looking forward to expanding the in-house innovation capabilities at Chainlink Labs, leveraging our existing technology advantage as a springboard to solidify Chainlink offerings as the industry standard for trust-minimized blockchain services.”

In addition to Dr. Malkhi, Mike Derezin also joined Chainlink Labs. Derezin spent more than a decade at LinkedIn, the world’s largest professional network, where he helped lead and scale two businesses, Learning Solutions and Sales Solutions, which became leaders in their respective markets. He has more than 20 years of experience in the technology sector, including as a co-founder of two startups, one of which was acquired by Thomson Reuters. Derezin will provide the operational excellence that enables the continued growth and success of Chainlink Labs.