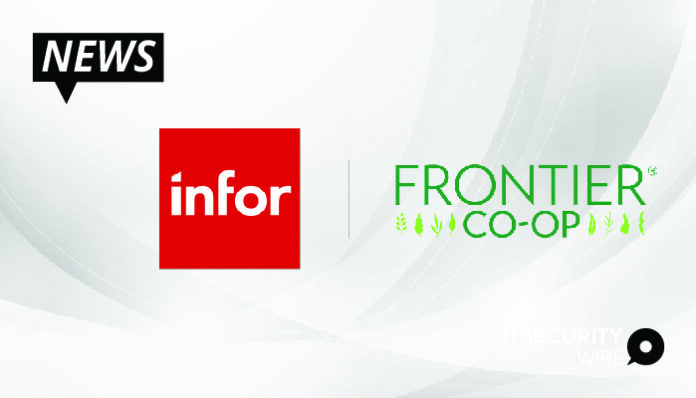 “When you modernize your ERP, you need precise business process controls to avoid risk, especially in the manufacturing process,” said Eduardo Pulido, Frontier Co-op vice president of IT. “You can take the path of doing it manually, but it’s resource intensive, slow, and error prone. With Infor GRC, the entire process is automated, with industry standard controls available out of the box, so we can immediately start to monitor violations and resolve.”

Frontier Co-op® is a member-owned cooperative manufacturer of natural and organic products, founded in 1976 and headquartered in Norway, Iowa. It sells products under the Frontier Co-op, Simply Organic®, Plant Boss® and Aura Cacia® brands. Products include culinary herbs, spices and baking flavors; bulk herbs and spices; plant-based organic meal solutions; and aromatherapy products with a wide selection of organics.  Frontier Co-op manufactures and distributes products throughout the United States and Canada.

Frontier Co-op has been an Infor customer for three years, after swapping out its legacy ERP solution for Infor CloudSuite Food & Beverage in 2019. Modern ERP systems require precise business process controls to reduce errors during the manufacturing process and help mitigate the risk of theft or fraud. Frontier Co-op’s small IT team knew that manually performing audits and user provisioning was time intensive and error prone. Working with Infor, Frontier Co-op implemented Infor GRC in less than three months and has seen 10% less demand for IT support.

“The goal with Infor GRC is to provide customers more automation so they can efficiently and effectively manage security access,” said Infor Chief Technology Officer & President of Products Soma Somasundaram. “We do this by integrating with applications to continuously monitor segregation of duties within and across applications, run what-if scenarios and generate alerts and audit reports. With Infor GRC, we are pleased that customers such as Frontier are finding it easier and less costly to diagnose business risks and make decisions to remediate and mitigate violations.”

Also Read: The Death of Password: End of a Cybersecurity Nightmare

Infor GRC provides Frontier Co-op out-of-box risk and compliance software, enabling finance, audit, and IT users to share a common platform to monitor controls for Infor CloudSuite Food & Beverage. In addition to the lower demand on IT resources, Frontier Co-op has realized a number of other benefits from Infor GRC, including:

“What’s great about GRC is that it’s integrated in our platform, and our business users can easily see what they need to see without leaving the application,” explains Rick Ledford, Frontier Co-op IT operations and infrastructure manager. “GRC was very easy to deploy. Infor helped us configure and walked us through the basics, but the rest of it was just understanding the rule books, which are created by Infor and are industry standard. So, we didn’t have to recreate the wheel. We could just run analysis against the rule books and find out violations. It was very simple to implement. We could add additional components easily because they’re intuitive, like the approval process or adding a rule to the rule book. GRC was really easy to implement, and we were able to get value from it almost from day one.”

The Changing Landscape of Digital Identity

Cybersecurity: Top Three Trends and Drivers to Watch in 2022