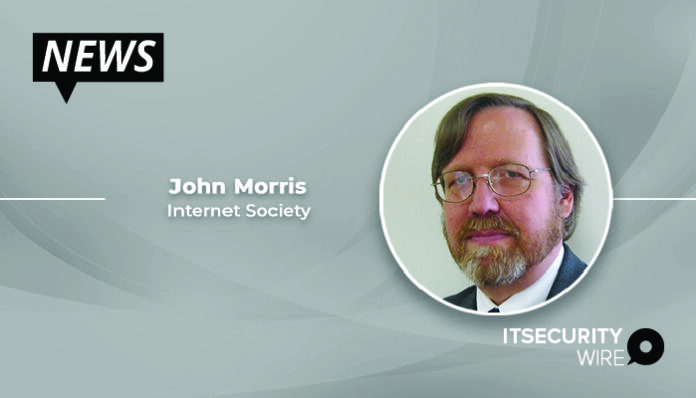 The Internet Society, a global nonprofit organization that promotes the development and use of an open, globally connected, and secure Internet, today announced the appointment of John B. Morris, Jr., as Principal, U.S. Internet Policy & Advocacy. With a career in technology policy spanning the public, nonprofit, and private sectors, Morris joins the Internet Society after most recently holding the position of senior non-resident fellow with the Center for Technology Innovation at the Brookings Institution.

Prior to Brookings, Morris served under two presidential administrations as a career member of the Senior Executive Service at the National Telecommunications and Information Administration (NTIA), an agency within the U.S. Department of Commerce. At NTIA, he led efforts across a broad range of technology policy issues including privacy, cybersecurity, national security, surveillance and law enforcement, network neutrality, intellectual property, and emerging technology. As the Internet Society’s Principal, Internet Policy & Advocacy in Washington, DC, Morris will be joining a global team of Internet experts to drive campaigns that promote and defend the Internet both in the United States and across the globe.

“The Internet Society is a leading voice for the Internet – and for the open, secure and globally connected nature of the Internet that has provided so much value to people around the world,” Morris said. “I hope to be able to contribute to the Internet Society’s efforts to help stakeholders – including industry and governments – to navigate the serious challenges that we face in the online environment while still promoting the core values that have made the Internet a key driver of citizen empowerment and economic growth around the world.”

Morris has also served as General Counsel of the Center for Democracy & Technology (CDT), and the Director of CDT’s Internet Standards, Technology and Policy Project, Morris led the organization’s work on free expression issues, and worked on privacy, surveillance, cybersecurity, net neutrality, and other issues. He was also active in technical standards development efforts at the Internet Engineering Task Force (IETF) and the World Wide Web Consortium.