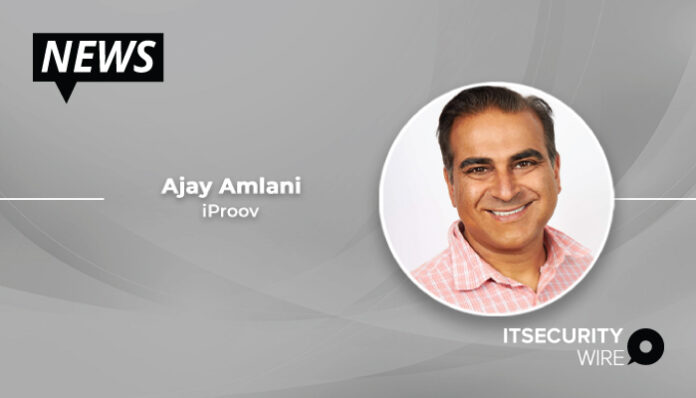 iProov, the world leader in face biometric verification and authentication technology, announced today that Ajay Amlani has been named SVP, Head of Americas. In this role, Amlani will be responsible for the expansion of iProov’s Genuine Presence Assurance® and Liveness Assurance™ technology in the region.

With identity theft and cybercrime increasing dramatically in both North America and Latin America, the demand for secure online identity verification and authentication is soaring. Amlani will be enabling government and private sector organizations to implement multi-factor authentication and passwordless strategies with face biometric technology that maximizes security, usability, inclusivity and privacy.

“I am delighted to welcome Ajay to iProov as we continue our expansion throughout the Americas,” said Andrew Bud, Founder and CEO of iProov. “He is a respected and accomplished identity technology expert, with deep knowledge of cybersecurity across both the government and private sectors. Ajay will drive the adoption of iProov’s face biometric technology as the premier way to verify and authenticate consumers in the region against the backdrop of increasing cyberattacks and identity theft.”

Also Read: How Enterprises Can Guard Against Attacks on their OT Environments

Since 2004, Amlani has been growing successful identity technology companies. He was a co-founder who built CLEAR’s first identity platform for airport implementations, and the founder of YOU Technology, a mobile-first, retailer-focused identity and loyalty platform. After selling YOU Technology to The Kroger Company in 2014, he launched Kroger’s first mobile consumer experiences (e-commerce, personalized discounts and loyalty) as an Executive Vice President.

Amlani also serves as a strategic advisor for identity to leaders in e-commerce, artificial intelligence, and identity technology ranging from publicly-traded companies, such as DocuSign and PayPal, Credence ID, venture capital investors and small to midsize disruptor companies. From 2019–2021, he reported to the CEO of IDEMIA and served as SVP Corporate Strategy/Development and GM of the Commercial Business Unit.

“iProov’s verification and authentication technology is leading the field in its security and simplicity,” said Amlani. “Governments and enterprises across the Americas desperately need to protect their customers and employees from identity theft and other cybercrime and iProov combats just that. I look forward to working with the iProov team to bring trust, safety and reassurance to the government, travel, financial and healthcare sectors in the region.”

In 2003, Amlani was asked by President George W. Bush to serve The White House and the newly-formed Department of Homeland Security (DHS) as a White House Fellow and Senior Policy Advisor to Secretary Thomas J. Ridge. He led many of DHS’s first-ever identity technology initiatives (biometric deployments, REAL ID, no-fly lists, advanced passenger manifests, etc.) and also its international negotiations with the Group of Eight (G8), the United Nations (UN), the Organization of American States (OAS) and the European Union (EU).

From 2017–2019, Amlani was asked by Department of Defense (DOD) Secretary Ash Carter to help start the Defense Innovation Unit (DIU), the first-ever Silicon Valley-based unit of the DOD, where he served as a CEO in Residence and the unit’s Director of Commercial Engagement. Secretary James Mattis asked Amlani to remain following the presidential transition of 2018.

Amlani holds both a Master of Business Administration from the Ross School of Business and a Bachelor’s in Engineering with honors from the University of Michigan.

Cyber Security Awareness is the Key to Cyber Resilient Enterprise

Strategies for Securing Critical Infrastructure in the Digital Battleground