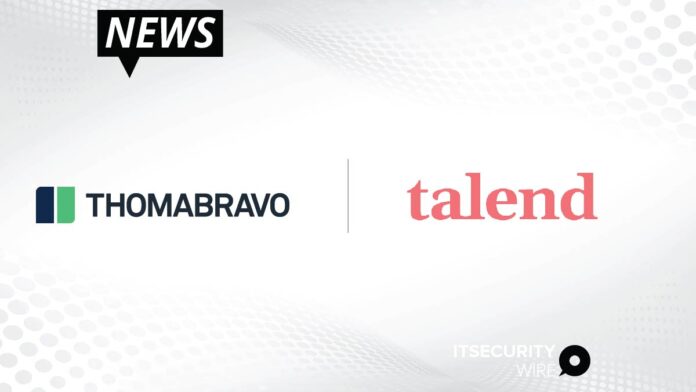 Thoma Bravo, a leading software investment firm, today announced the completion of its acquisition of Talend, a leader in data integration and data integrity, in an all-cash transaction that valued Talend at approximately $2.4 billion.

In connection with the tender offers, Talend shareholders were entitled to receive $66.00 per ordinary share (whether held directly or via an ADS representing one ordinary share) in cash, representing a premium of approximately 29% to Talend’s closing price on March 9 and an 81% premium to the volume weighted average price over the last twelve months from March 9.

With the completion of the acquisition, Talend becomes a private company and will continue investing in its cloud transition as well as products and solutions that serve the evolving data needs of its customers.

“The close of the transaction marks an important milestone for Talend as we begin a new chapter as a private company. The digital transformation that has taken hold during the pandemic has emphasized the importance of data integration and data integrity, and we are thrilled to have the support of Thoma Bravo to accelerate Talend’s business,” said Christal Bemont, Chief Executive Officer of Talend.

Also Read: How CISOs Can Effectively Assess the Health of Cybersecurity Programs

“Thoma Bravo has an impressive track record of catalyzing the growth of its portfolio companies, and we look forward to leveraging their deep software and operational expertise as we drive continued innovation to ensure the data health of companies around the world.”

“We are excited to officially begin our partnership with Talend and to work alongside Christal and the Talend team to further bolster the company’s industry leadership,” said Seth Boro, a Managing Partner at Thoma Bravo. “Talend, as a newly private company, is well positioned to capitalize on the global need for businesses to operationalize their data to solve complex problems.”

“Every business needs clean and reliable data, and the Talend Data Fabric platform handles every stage of the data lifecycle and puts healthy data at customers’ fingertips,” said Chip Virnig, a Partner at Thoma Bravo. “Talend’s transition to the cloud will only further solidify their market leadership among blue chip companies across industries and we look forward to supporting the company in this exciting next phase.”